A presentation and intervention with filmmaker Ed Webb-Ingall which looks at the impact and legacy of Section 28.

About Ed Webb-Ingall’s ‘We have rather been invaded’

Studio Voltaire has commissioned British filmmaker Ed Webb-Ingall to undertake a project which looks at the impact and legacy of Section 28, partnering with the British Film Institute and METRO.

‘We have rather been invaded’ takes a key moment of protest as its focus – the invasion of a broadcast of the BBC Six O’Clock news on May 23rd 1988, the night before Section 28 became law, by four lesbians protesting against Section 28. This event entered the public imagination at the time with BBC broadcaster Sue Lawley stating ‘we have rather been invaded’, as she continued to read the news whilst the ‘invaders’ handcuffed themselves to studio equipment. Meanwhile, the women’s voices echoed throughout the studio as they repeatedly and loudly demanded: “STOP SECTION 28… SCRAP SECTION 28!” The action was subsequently reported on and interpreted for the Ten O’Clock news on the BBC and ITN news the same night, as well as in national papers the following day who took the event as an opportunity to deploy a series of satirical headlines.

In response to this protest act, Webb-Ingall has worked with a group of 15 LGBTQ+ young people to collate visual and textual material and collaboratively produce a new film.

The group consisting of 16 – 25 year olds, who in 1986 were not yet born to witness the ‘invasion’ first-hand, but can now register the weighted relevance and significance of the event. Their research delves into queer archives, graphic and typographic design as well as performance and writing exercises, in order to create visual manifestations and interpretations to further their understanding and interpretation of the 1988 protest act. In enacting archival material, the group and film will interrogate past and present recollections of this defining historical moment.

The single screen video will present the stories, experiences and oral histories of individuals in relation to Section 28 and the historic ‘lesbian invasion’ event.

END_OF_DOCUMENT_TOKEN_TO_BE_REPLACED

Ed Webb-Ingall is a filmmaker and writer with an interest in exploring practices and forms of collaboration. He is currently a TECHNE PhD candidate at Royal Holloway University, Surrey, where his research focuses on the history and practice of community video in the UK between 1968 and 1981. Recent projects have been with The Showroom, Open School East, Tokyo Wonder Site, Echo Park Film Center, no.w.here, Tate Liverpool, LUX and The British Film Institute. He co-edited a book on the filmmaker Derek Jarman, published by Thames and Hudson in September 2013. 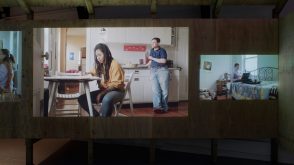