On March 12th 2013 eleven individuals met in a central London conference facility to perform, for a period of one hour a collective and silent refusal of Work.

For the purpose of this event Work was defined thus:

Action performed where one’s energy potential (value) is transferred to the reproduction of the conditions of one’s own oppression.

The action was audio recorded and may be listened to above.

Bonnie Camplin describes her practice broadly as the Invented Life – it has included eight years as a para-theatrical producer, director, dancer and performer of experimental club nights in Soho London as well as work across the disciplines of drawing, film and video, performance, music and writing. She has shown in London and internationally and her work has included collaborations with artists Enrico David, Mark Leckey, Lucy McKenzie and Paulina Olowska.

She has lectured at Goldsmiths London, The Ruskin School Oxford, University of Manchester, the Architecture Biennale Venice and has participated in Jury work at the AA London. She was Professor of the Film-Class at Städelschule Frankfurt from 2008 to 2010.

Most recent projects have been devising and leading a workshop on the metaphysics of surveillance at Hayward Gallery London as part of the Wide Open School project as well as a solo show STW with Michael Benevento LA. She is currently a mentor for the Lux Associates Artist Programme, and a visiting lecturer at Goldsmiths College. 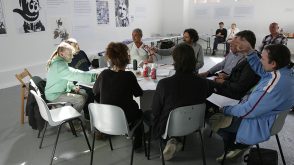