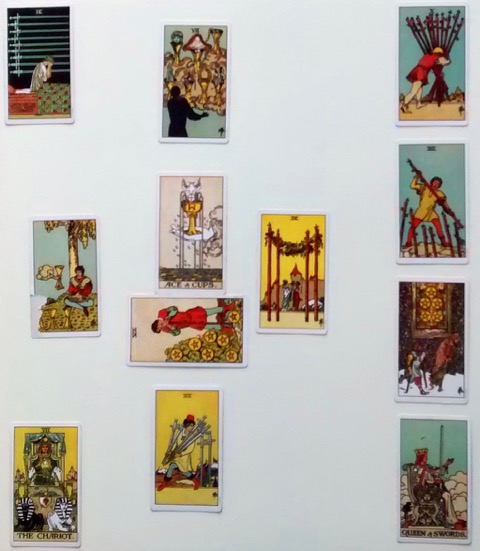 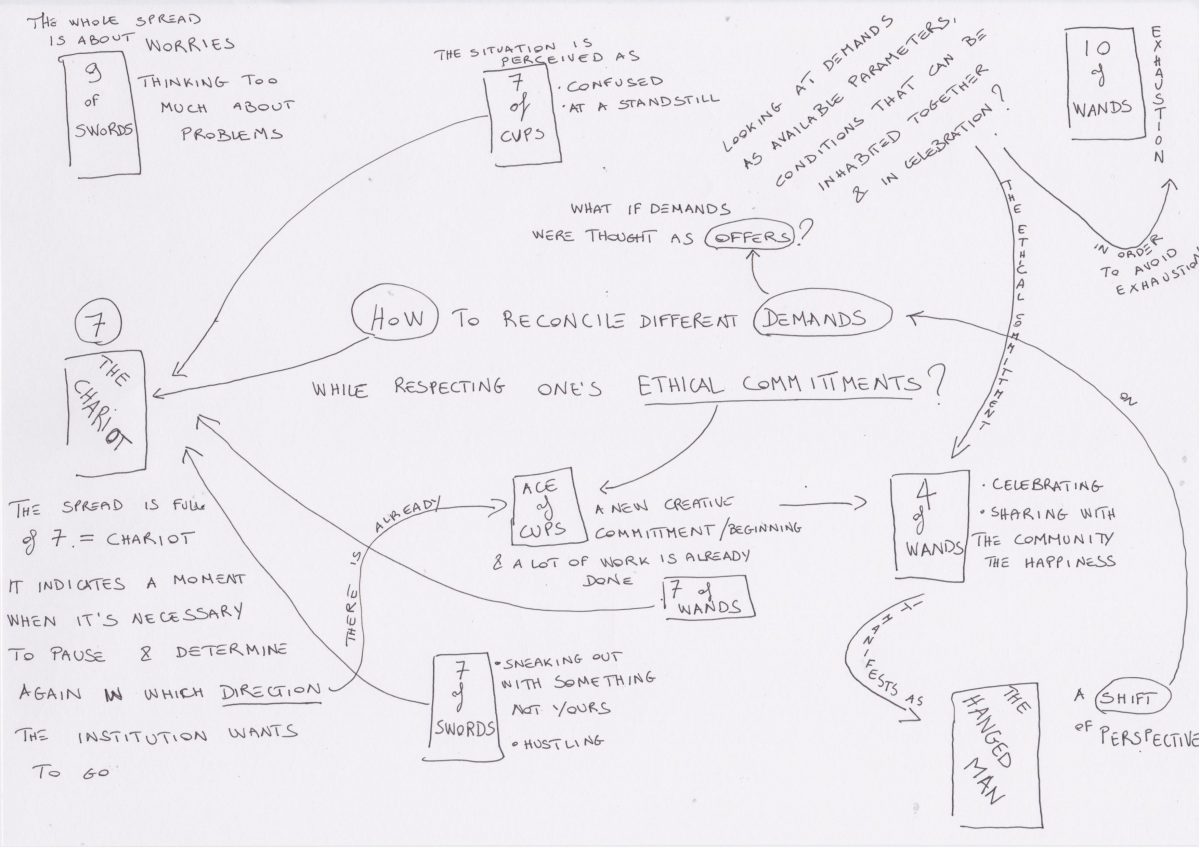 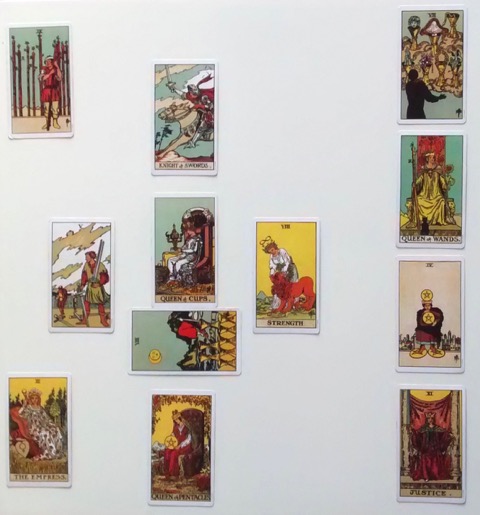 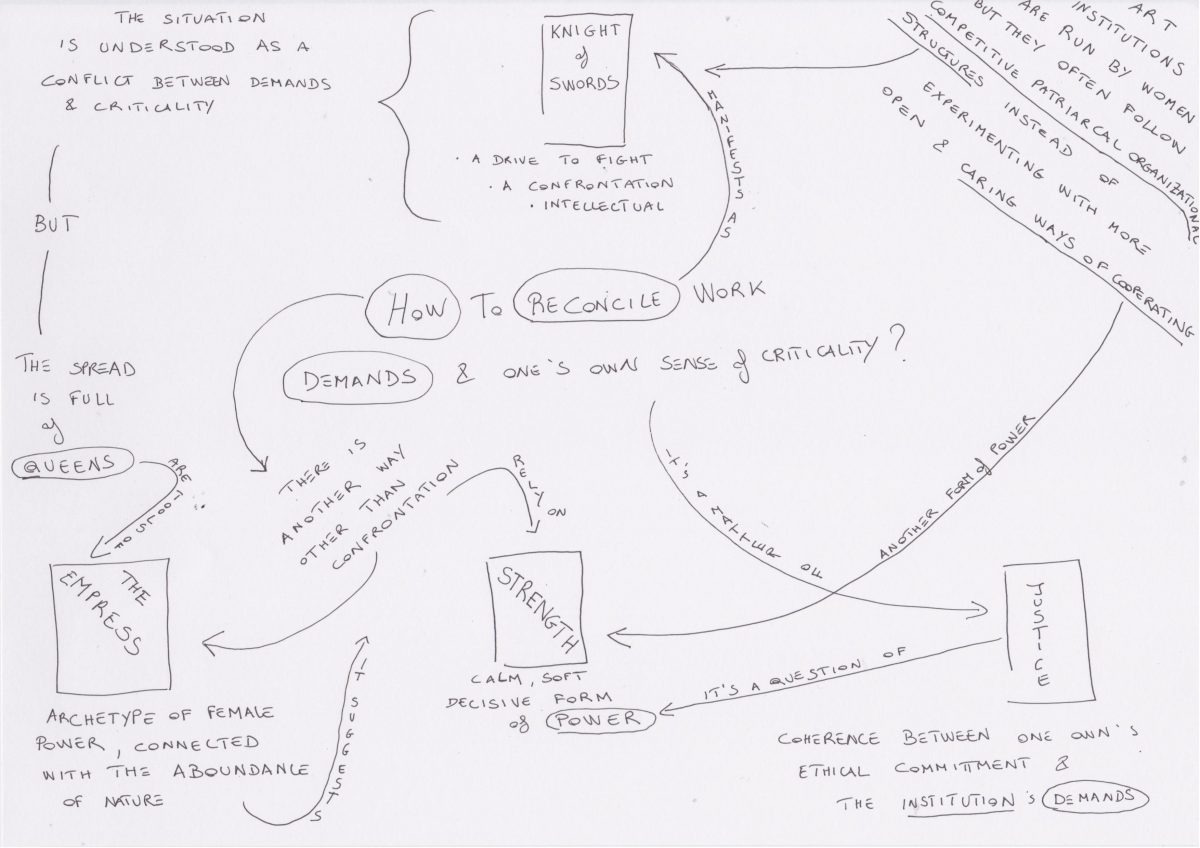 During our private sessions of Poethical Readings at The Showroom Gallery, in July 2015, we did readings for several people and institutions. Among them were two art organisations, each of which asked very similar questions:

Institution (A) asked how to reconcile all the different demands (from personal to financial) in full respect and pursuit of their ethical commitment.

Institution (B) asked how to reconcile the individual worker’s sense of criticality with general work demands.

Both questions recall the difficulties of reconciling work demands and ethical-political commitments. During each reading we engaged in conversations that revealed how similar questions generate very different sets of issues, reflecting the complexities and complications unique to any given situation.

Institution A’s spread shows, from the outset, that their ethical question expresses a fundamental challenge. The spread exposes a conflict involving all the elements of their work: the material (7 of Pentacles), the intellectual (7 of swords), the affective (7 of cups), and the spiritual (7 of wands). The 7s are the tools of the major arcana The Chariot that refers to an internal struggle, will power, as well as the necessity/ability to control one’s emotions and passions. Generally, the spread indicates that a dispassionate, calculated approach to the situation would better identify needs, find adequate solutions, and gently but firmly direct them in the envisioned course of action. Fears, anxieties, and exhaustion are present but theirs is not a hopeless situation. There is abundance, plenty of creativity, capacity for materialization, and a marked commitment to sharing with the community.

Institution B’s ethical question relates to a conflict between individual’s ethical commitments and their institution’s place in the art world. The spread exposes two distinct organizational visions: that which prevails in the art context and the one that is actualized in the working of art institutions. The appearance of three Queens indicates the organizational embodiment of the art institution’s vision: Queen of Wands (inspiring), Queen of Cups (intuitive), Queen of Pentacles (nurturing) – the absent Queen of Swords (deciding) indicates a quality shared with the larger art world. The Queens are the tools of the major arcana Empress, which figures a power that is creative, nurturing, and protective. This spread shows the contradiction between the patriarchal ethos of the art world and the practical reality that most art institutions are run by women. In these institutions run by The Empress we find imagination, experimentation, creativity, and meaningful modes of cooperation.

Arts institutions, like other similar settings, function as modern neoliberal organizations. The prevailing discourses, practices, and operations as well as principles, rules, and reward systems encourage competition, productivity, efficacy, and they also entertain a narrow conception of success. Not surprisingly, these readings capture the ethical nature of the challenge faced – experienced as emotional and intellectual tension – by female leaders, managers, and workers working at such institutions. For they carry the burden of reconciling ethical-political commitments with institutional demands that express a completely different set of principles and modes of operating.